This recently written, unpublished text by Mónica Ríos delves deep into the poverty that exists in Detroit in the North.  We are faced with a man who has been abandoned by his father; who had possibly moved to the South in search of a better life. He recalls on the times that his father would knock him emotionally. Taunt him with insults; leaving him feeling useless, unnecessary and a waste of space. Unemployed in this declining area, he tries to write articles, however his mental state remains an obstacle. Once a successful area, Detroit declined and this man was left with nothing. He longs for a father figure and someone to love him. He accuses himself of all wrong goings. In the text he is faced with neighbours leaving the area and traveling South in search of a better living condition; a more stable life, be it under the arms of different men or a simple escape like his father had done. This emotional text shows the pain and suffering brought on by the decline of the Motor Industry; that which almost makes life unbearable.

“MÓNICA RÍOS IS A SIGNIFICANT LATIN AMERICAN WRITER AND EDITOR. EDITORIAL SANGRÍA, WHICH SHE DIRECTS, HAS AN IMPORTANT INTERNATIONAL ECHO AND HERSELF, AS A NARRATOR, HAS BEEN RECOGNIZED FOR HER VANGUARD BOOKS WHICH OCCUPY AS NARRATIVE BACKGROUND CINEMATOGRAPHY, CENTERED IN THE IDEA OF ESCENE AND SCRIPT.” – Diamela Eltit 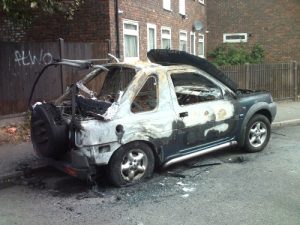 The Author of many escene and visually aesthetic novels such as Alias el Rocío (Lanzallamas, 2014) and Segundos (Sangría Editora, 2010). Miss Vasquez unpublished book “Autos que se queman” is packed full of imagery and depictions from some of her earlier childhood memories. Following the life of a man who struggles with childhood memories surrounding the haunting, scornful verbal abuse and taints from his father and portrayed to the reader through metaphorical, atmospheric scenes. The Novels of Miss Rios have had many positive reviews over the years, those in Castellano and in English. One man, Mr Gomez, highlighted the unusuality and individuality of Miss Rios’ writing in a review for GoodReads Website.

“It’s the strangest book I’ve read in many years. It’s a minute category. What it is, is that it surprises me completely.” -Renato Gomez

“…Do you know them? The voice comes out of the body that goes up the stairs. From the window of the attic, the neighbour looks outside. She opens the three windows to let in the sun and modest heat. She doesn’t let go of her plastic planter. How strange, don’t you think?  The voice of this guy comes from another place, because he knows that in the night the image will enter into his dream. I don’t know them. Or do you? How many cars like this came in across the eastern seaboard in 79? They put the soil in slowly, gently placing the wildflower seeds. This guy knows that the neighbour with the red ink pencil could do this on her own, but now she spends so many days writing on her own that this guy – with his clinical eye – can see in the books, in disarray, the mental disorder that inhabits the room; just like in his room. Unemployment is beginning to seep in through the bars of the model city.”